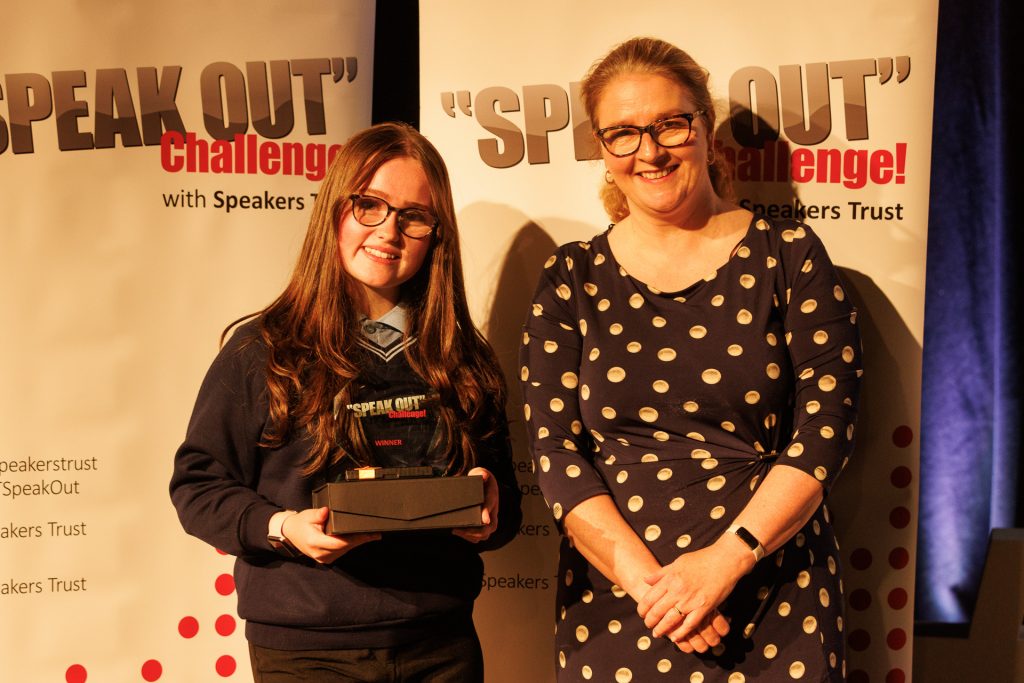 Imogen Burstow from Bartley Green School wowed a packed audience at the Midlands Arts Centre (MAC) on May 17th and was announced the winner of The West Midlands “Speak Out” Challenge! 2021-22.

Speaking directly to her Grand Final audience, Imogen said: “Do I really want to tell my grandkids when I’m 70 years old that the most interesting and rebellious thing that I did as a teenager was getting a detention from school? To be honest there is no real way to live your teenage years.” Her upbeat and empowering speech was met with roaring approval from the audience and judges.

She closed her speech with a compelling appeal; “These years are your years, and you should live them exactly the way that you want to. Your teenage years are the best years of your life, so let’s make some memories!” 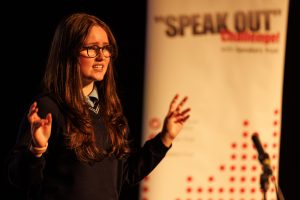 You can watch Imogen’s winning speech in full here:

Marie Fryers, Head of HR Advisory, HSBC UK and “Speak Out” Challenge! judge said: “The “Speak Out” Challenge! supports more than young people’s employment and career paths, they help build skills for life – ones that will empower participants to thrive at school, at home and in their communities now and in the future. We are incredibly proud of Imogen, Jaime and all the young people who have taken the challenge in the West Midlands this year, and wish them a world of opportunity and success in the years to come.”

Imogen Burstow scooped up the top price of 100£. When asked how she felt on becoming Champion, Imogen said, “The speakers trust “SPEAK OUT” challenge was everything I could have wanted and more, it allowed me to develop my public speaking and confidence, all whilst making new friends! It was so exciting being on stage, and although ! was nervous, I had so much fun! The trainers were so helpful and made me feel so comfortable through the whole experience. Thank you so much!”

Third place was awarded to Jaime Oreton from The Streetly Academy for their thought-provoking speech on the climate crisis. 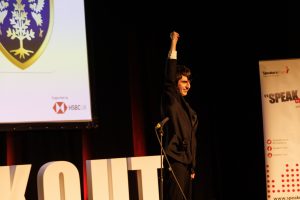 The West Midlands “Speak Out” Challenge! is designed and delivered by Speakers Trust in partnership with AimHigher and is funded and supported by HSBC UK to encourage 14- and 15-year-olds to develop public speaking and communication skills as well as build self-esteem and confidence. Now in its 5th year, over 700 young people in state schools across the West Midlands took part in this year’s Challenge.

During the academic year, each school has received one free one-day workshop in public speaking and communication skills. The student’s confidence in speaking to an audience, without notes, is measured at the beginning and at the end of the day.  During 2021-22, 68% of students have increased their confidence to stand up and talk to a group of people.

Russell Findlay, CEO of Speakers Trust said: “Our latest research shows that more than half of young people don’t feel their voices are heard. This is why Speak Out Challenge is so important and why we at Speakers Trust are so grateful for the support we get from all the teachers and our partner HSBC UK. The young people did a great job in sharing their ideas on really important subjects and I am sure that their friends, parents and carers in the audience were incredibly proud of their courage to speak out.”

Aimhigher Project Officer, Isabelle Kelly added: “We are incredibly proud of all the finalists who delivered their speeches at the final which was a brilliant event. Each student showed true confidence and bravery standing up on stage which is a credit to the valuable work Speakers Trust do. We are incredibly grateful to Speakers Trust and HSBC for providing this fantastic opportunity and giving them a voice – something that is more important than ever after the challenges they have faced in recent times.”